The use of Supercritical Fluids to make particles eliminates the shortcomings of traditional methods. There are a number of SCF techniques to produce particles of controlled size and morphology for organic molecules in the sub-micron range:

RESS-Rapid Expansion of a Supercritical Solution
With RESS, the material is dissolved in the SCF and then depressurized through a nozzle.

GAS- Gas Anti-Solvent
Here the compound is dissolved in an organic solvent, a supercritical fluid is introduced, expanding the volume and lowering the solvents solvent strength causing the compound to precipitate under controlled conditions of particle formation.

PCA- Precipitation by Compressed Fluid Anti-Solvent
With PCA, the compound dissolved in an organic solvent is sprayed into an SCF, causing supersaturation and solute precipitation.

SEDS -Solution Enhanced Dispersion of Supercritical Fluids
Using SEDS, the compound is dissolved in an aqueous solution and simultaneously sprayed through a coaxial nozzle with an organic solvent into the supercritical fluid. The water is dissolved into the solvent and SCF causing supersaturation and precipitation.

Nanoparticles of inorganic compounds can also be produced using supercritical fluids and sub-critical fluids. Thermal decomposition and hydrothermal syntheses are but two ways to accomplish this.

Applied Separations can provide you with the means to make both organic and inorganic particles. 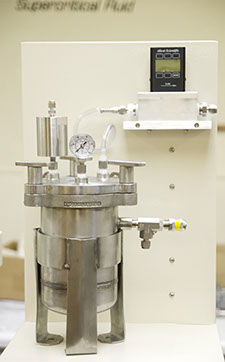 Unfortunately, each of these traditional techniques has problems such as thermal and chemical degradation. Crystallization by adjusting supersaturation, using anti-solvents, or employing reactions and precipitations also have shortcomings: